Mainstreaming Black Power in the USA in the 1960s and 70s: new research findings

Posted on October 25, 2019 by historyatkingston

As part of our celebration of Black History Month, HistoryatKingston looks back on a very successful talk that took place at Kingston University earlier this year on the mainstreaming of Black Power in the USA.

It was a well-attended session in the ‘Cultural Histories at Kingston’ seminar series, co-chaired by Dr. Jeremy Nuttall and organized by the History team at Kingston. The event saw a fascinating talk by Dr. Tom Davies, Senior Lecturer in American History at the University of Sussex.

His main theme was the response of U.S. politicians to the rise of Black Power (BP), and the various attempts by those politicians to blunt BP’s radical edge. Dr. Davies spoke to his attentive audience on how the process of the ‘mainstreaming’ of Black Power in 1960s and 1970s America had seen attempts to create a form of ‘Black capitalism’.

This was also the topic of his recent award-winning book Mainstreaming Black Power (University of California Press, 2017). Basing his talk on this important contribution to the historiography on American history and politics, Dr. Davies explored the idea that the Black Power movement allowed for a catharsis of black rage in the 1960s and 1970s, but achieved little institutional transformation or what he termed ‘black uplift’.

He revisited the story of race relations in the USA in those two watershed decades, especially the experiences of various groups of BP activists in New York, Atlanta, and Los Angeles, and demonstrated persuasively that white power structures did engage with BP in specific ways. However, those ways tended to ultimately reinforce, rather than seriously challenge, existing racial, class and gender hierarchies in the USA.

As Dr. Davies pointed out in his talk, ‘Black Power’ envisaged the radical redistribution of wealth in American society, but had suffered somewhat from a negative image of ‘violence’ (especially as manifested in the Black Panthers). However, Dr. Davies argued that Black Power was not always violent, and could be flexible and non-violent, with many of its aims being open to interpretation.

Moreover, the rise of BP had raised a key question among the USA’s established political elites: how could mainstream politicians engage with Black Power and blunt its edge, making it more middle-class and acceptable? The strategy adopted by white politicians involved an effort to co-opt Black Power and reform it. Dr. Davies explored how this was attempted by both Robert F. Kennedy for the Democrats in the 1960s and, later, by Republican president Richard Nixon in the early 1970s.

Dr. Davies explained, for example, how Kennedy’s Community Development programme, designed to address Black poverty in urban areas, was part of this effort to ‘mainstream’ Black Power. In particular, the idea of a Community Development Corporation (CDC) had first been outlined by Kennedy in a speech he made in 1966, which was based on his belief that the private sector could be used for targeted investment – to create jobs and better education opportunities for the Black community, and in the process help revitalise the inner cities. The consequent increase in Black home ownership, Kennedy believed, would in turn help create a more successful Black middle-class in America. Kennedy wanted to especially reach out to the Black community’s young and ‘blunt’ their radicalism. 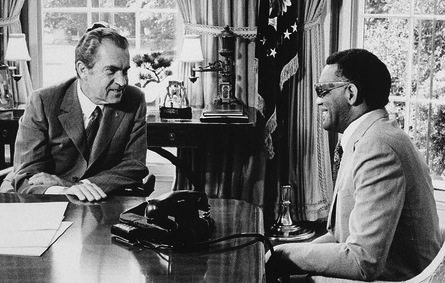 Interestingly, as Dr. Davies pointed out, Richard Nixon also pursued a similar policy and, with his ‘Black capitalism’ initiative, even appropriated some of Kennedy’s original CDC ideas. Nixon’s policy emphasised Black economic power and the need for greater Black mobility.

Nixon also hoped, of course, that this would help win over more Black supporters to the Republican cause, but this objective was not realised.

Dr. Davies’s very thoughtful talk was followed by a wide-ranging Questions and Answers session. All those who attended the session enjoyed the new insights offered by a lecturer who evidently has a very thorough, and notably impressive, grasp of the intricate complexities of the main historiography on U.S. history, including the scholarly debates that have taken place over the political fortunes of Black Power in American society during the two dramatic and eventful decades of the 1960s and 1970s.

Note: An earlier version of the above summary was published on the HistoryatKingston site in March, 2019.