When the History Dept at Kingston University put on a special talk in 2018 by three very research-active staff members to help commemorate 100 years since the end of the First World War, it proved to be one of the best-attended events of the year in our ‘Cultural Histories at Kingston’ talks programme.

Peoples’ fascination with the history of war in all its aspects – political, social and cultural – seems to be greater than ever, especially if it has a ‘local’ dimension. 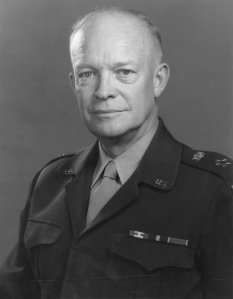 While at the National Archives at Kew recently, I noted that the bookshop is gearing up to commemorate the 75th anniversary of ‘D-Day’ in World War Two i.e. the Allied invasion of France in June, 1944. This brought back memories of some research I conducted on General Dwight D. Eisenhower (1890-1969) and his wartime role.

The planning for D-Day, one of the largest invasions of its kind, was one of the most complex and secret operations of World War Two, and was planned and overseen by General Eisenhower, who had been appointed Supreme Commander of the Allied invasion forces. The job carried a huge burden of responsibility, and the General knew that he would be sending many young servicemen to their deaths.

But what many people don’t realise is that ‘Ike’ Eisenhower lived and often worked in Kingston-on-Thames from 1942-1945. While most of his military duties were carried out at his headquarters in nearby Bushey Park, General Eisenhower rented a small but pretty cottage called ‘Telegraph Cottage’, located in Warren Road, at the top of Kingston Hill (not far from what is now Kingston University’s Kingston Hill campus). Used as a respite from his busy military life, the cottage and its peaceful and private location became a source of joy for Eisenhower. In fact, when he took up oil-painting (at the suggestion of Churchill, as a way to cure a chain-smoking habit), Eisenhower’s wartime paintings included one of Telegraph Cottage.

Although much of the main planning for D-Day was conducted at his HQ in Bushey Park, it is said that some of the logistically intricate and top-secret planning for ‘Operation Overlord’ (as D-Day was officially named) was still discussed at Telegraph Cottage. A small D-Day operations room was even set up in the garden shed. A small staff at the cottage helped protect the General from too many visitors, however, and were determined to help him enjoy some genuine free-time away from all the pressures of being Allied Commander in charge of what would be a huge invasion armada.

Eisenhower’s presence in Kingston was a closely-guarded secret, of course, as there were genuine security fears that the Germans might send an assassin if they had found out the General’s precise location. These fears were probably fanned by Eisenhower’s habit of going horse-riding in Richmond Park, albeit during times when it was closed to the public.

One of the key members of his small staff at Telegraph Cottage was an Anglo-Irish woman named Kay Summersby, who was a member of the British Mechanical Transport Corps and became Eisenhower’s personal driver (see photo). She regularly dined with him and he apparently seemed very cheerful in her presence, sometimes seeking out her advice. Both during the War and after, there was speculation about the nature of Eisenhower’s relationship with Summersby, as the General only visited his wife back in the USA on two occasions during the War.

Summersby and Eisenhower later strongly refuted the rumours about their closeness. However, when she was close to death in 1975, Summersby appeared to change her mind and confirm that she and the General had indeed been more than just good friends. In fact, she claimed they had had a passionate but unconsummated wartime affair. Most of Eisenhower’s biographers rejected this, and still do. But it appeared to be further confirmed when a cache of private letters between the two emerged in 1991, letters which offered further hints at how close the General had become to his favourite driver. This aspect of Eisenhower’s time in Kingston re-emerged in 2018, when the UK’s media carried yet more claims about their relationship.

Ultimately, it is difficult for the historian to determine the truth or otherwise of all this. What is certain, though, is that Telegraph Cottage became a beloved haven for Eisenhower during the two years or so that he resided there. Unfortunately, the Cottage no longer stands, as it was destroyed by fire in 1987. However, a plaque to Eisenhower and his residency there was put up in the road by the Royal Borough of Kingston in 1995, to commemorate the 50th anniversary of VE Day and VJ day.

And I suspect it is highly likely that, as we approach the 75th anniversary of D-Day in June this year, there will be a renewal of biographical interest in ‘Ike’ and his life and career. After all, he was the General who also later became a two-terms President.