The Goebbels Quandary: German government in dilemma over bungalow used by Nazi propagandist

Posted on January 14, 2019 by historyatkingston

Retain or demolish? A luxury bungalow used by the notorious Nazi propaganda chief Joseph Goebbels has raised difficult ethical questions about the ways in which buildings associated with dictatorship and intolerance in the past should be treated in the present.

According to media reports, the German government has been placed in a dilemma over whether to spend money on the bungalow, which is in need of serious renovation, or whether to simply demolish the building. The cost of its possible renovation is estimated at more than 100 million euros, with basic maintenance of 1 million euros per year.

The bungalow, which is located to the north of Berlin, was used as a secret venue by Goebbels to seduce film actresses. It was also the location where he wrote the now infamous ‘Total War’ speech of 18th February, 1943, in which he urged the German people to ‘subordinate everything’ to the war effort and proclaimed his ‘unshakable’ belief that the Third Reich would achieve ultimate victory.

Joseph Goebbels (1897-1945), of course, was the Reich Minister for Culture and Propaganda from 1933-1945 and, along with his wife Magda, was fanatically devoted to Adolf Hitler; in particular, both Goebbels and his wife shared the Fuhrer‘s obsessive anti-Semitism. Indeed, in a notorious radio address made at the end of February, 1945, Joseph Goebbels made it clear that he would view life after the Third Reich as ‘not worth living, either for myself or my children’. Staying to the bitter end in Hitler’s bunker in Berlin in April, 1945 – and after the Nazi dictator had killed himself – Goebbels and his wife arranged the murder of their own children and then also committed suicide.

According to The Times newspaper (12th January), a Berlin city councillor from the ruling Social Democrats recently stated that no serious investors have come forward in the three bidding rounds that have been held since the unification of Germany in 1989-90, and that the ‘vast and remote complex, which includes a crumbling East German Communist-era building, was of limited historical interest’. 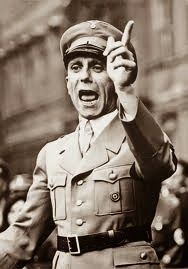 However, as the newspaper also noted, the fate of the building has fed into an ‘anguished debate over how Germany should handle its Nazi heritage and whether tearing down symbols of the regime amounts to erasing part of its fascist history’. Sven Heinemann, who sits on the supervisory board of the state property agency that owns the site, was quoted by the newspaper as commenting that the city wanted to avoid the bungalow becoming a shrine for current-day neo-Nazis, and that it made ‘little sense’ to spend a huge sum on its renovation. A final decision on the site could be taken this year (2019), after an expert report on the building is drawn up. Mr. Heinemann commented: ‘It was a private villa where Goebbels seduced some actresses. If the place were deemed that historically significant, efforts would have been made to explain its history by now’.

Members of Germany’s community of professional historians, however, have expressed dismay at the possible plans for demolition. It has been pointed out that the complex, in fact, represents Germany’s two dictatorships i.e. Nazi Germany and then the subsequent East German Communist regime. Some have pointed out that it could be utilized as a conference centre for young people or as a museum to show how the Nazi regime drove people to war and mass murder, especially as there appears to be a worrying resurgence of the extreme right in Germany and elsewhere in Europe today.

Goebbels started visiting the location as early as 1936, when the government gave him a lake and a small chalet on its shore as a birthday gift. However, in line with the egotistic ambitions of other leading members of the Nazi elite, Hitler’s propaganda expert decided that he required a much more prestigious retreat, and he issued strict orders for the construction of the complex in question, which was completed in 1939, and still stands today. The main building has 30 rooms, floor-to-ceiling terrace windows and, in evident reflection of the Nazi cultural fascination with neo-classical imagery, a statue of a nude ‘Aryan’ couple stands by the main entrance. 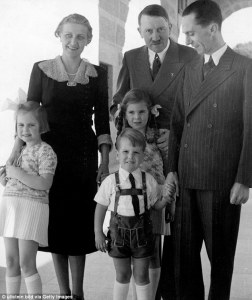 Goebbels, exploiting his position as Minister of Culture and Propaganda, and with a particular interest in movies, saw numerous opportunities to pressurise ambitious young actresses into offering him sexual favours, and used the bungalow for these secret liaisons, which was seemingly well away from the public glare of Berlin and also his wife, Magda (pictured with Hitler and her husband). According to recent biographers, such as the historians Ralph Georg Reuth and Peter Longerich, Goebbels became especially besotted with the Czech actress Lida Baarova.

The two had an affair which lasted two years and this only came to an end when Magda Goebbels persuaded Hitler to personally intervene. Hitler, keen to maintain the image (and myth) of the Goebbels family as the perfect model Nazi family, called Joseph Goebbels before him and ordered the affair to end. Although privately devastated, Goebbels obeyed his Fuhrer, worried that he might fall out of favour and thus enable other key Nazi lieutenants to replace him in Hitler’s affections.

After the conclusion of World War Two, the building was used as a hospital by the Allied forces of occupation and then, with the advent of the East German dictatorship, it was placed under the control of the youth wing of the East German Communist Party, where it was used to indoctrinate eager party officials from around the globe. 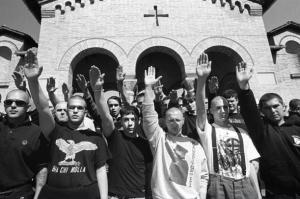 One can sympathise with current-day German fears that, if renovated, the bungalow could possibly become a shrine for neo-Nazis, as other similar locations have certainly experienced this, such as the grave of Rudolph Hess, and also Hitler’s birthplace in Austria. Similarly, in Italy, Benito Mussolini’s tomb has seen regular gatherings of neo-Fascist youths (see photo). Moreover, what seems like a whole cottage industry has developed in the local area devoted to selling Mussolini souvenirs, postcards, posters, T-shirts and other memorabilia, something which leaves a bitter taste in the mouth.

On the other hand, from a historian’s perspective, one could argue that there may still be a very good case for the preservation of the Goebbels bungalow – the idea of an educational facility, conference centre or museum devoted to explaining the rise of Nazism and the nature of the Holocaust would, in my view, be money well spent, especially given the worrying return of extremist politics in recent years.

It also remains important to ‘de-mythologise’ the myths that Goebbels sought to build up about himself and also about the leader and the creed he was devoted to. In a sense, the Goebbels bungalow is a very visual reminder of the blatant lies and falsehoods of Nazi propaganda and the sheer hypocrisy of one of Hitler’s leading fanatics.