Why I’d wear a bonnet rouge for Robespierre

Posted on September 8, 2016 by historyatkingston

In the following Christine Evans-Appleyard reflects on her experiences of being a mature student, studying history, and what she made of the enigmatic figure of Robespierre.

There’s something about an idealistic male leader who carries an air of vulnerability that’s very attractive to women. Robespierre was one such man. Physically unimpressive and not much on the looks front either – his fellow-revolutionary, Saint-Just, trounced him in both those departments – Robespierre nevertheless had many female admirers of all ages.

Inevitably, his complete indifference to almost all of them only served to fuel their interest. The more politically impassioned he became and the more he appeared to suffer as a consequence, the more they wanted to wrap him up, take him home and feed him oranges. 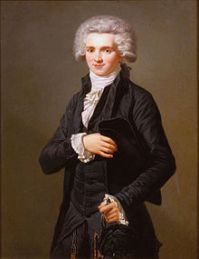 I have to hold my hand up here and admit that it was these same qualities which not only first drew me to Robespierre but which sustained my interest in him as a female, final-year History undergraduate taking the Enlightenment, Terror and Revolution module at Kingston.

Who was this man whom some historians had labelled a monster and a tyrant? Had he really been a cold-bloodied psychopath or was it true, as others suggest, that he was simply misunderstood – the victim of a double tragedy which ruined his childhood and a strictly religious education which, together, conspired to render him an emotionally needy and desperately driven adult? As a mature student, I felt I had life experience on my side and I wanted to get to the bottom of it. Only one thing was certain: Robespierre was a man who could simply not be ignored.

As anyone who has ever studied the French Revolution can tell you, there is no shortage of literature on the topic. What’s more, the historiography is generally as lively as its subject matter. From the work of Mathiez and Lefebvre through to the present day, historiography doesn’t often get more passionate than it does about Robespierre, with historians not afraid to take sides and hurl ammunition.

As a student starting out in No Man’s Land you just have to remember to duck occasionally so that you don’t get caught in the crossfire. Fortunately, at Kingston, we have one of the most forward-thinking contemporary French Revolution historians, Marisa Linton, leading the course, which – in my opinion – is one very good reason for taking the module. Not only has Marisa Linton written numerous books and journal articles that have won the admiration of her peers (see David Andress’s review of Marisa’s latest book, Choosing Terror: Virtue, Friendship, and Authenticity in the French Revolution (Oxford University Press, 2013) at http://www.history.ac.uk/reviews/review/1478 but, on a practical level, she is consummate at guiding her students effectively through the diversity and depth of reading that the module – like any final year course – demands.

As a late returner to education, I had never studied 18th century history before and so, for me, the course represented quite a challenge and meant learning from scratch. I can admit now that I started by reading internet content aimed at school students as well as entry-level books, including Introducing the Enlightenment: A Graphic Guide, by Spencer and Krauze (Faber and Faber, 2013) and The French Revolution – A Very Short Introduction, by William Doyle (Oxford University Press, 2001).

Once I understood the basic sequence of events I was able to progress to the interpretation and was soon reading the likes of Furet and Chartier. One of the most useful books I read was Peter McPhee’s The French Revolution, 1789-1799 (Oxford University Press, 2002). Peter McPhee has an easily accessible writing style which makes him a good friend to students. I also had the pleasure of hearing him speak, with Marisa Linton, at a University event in Kingston at the end of my second year. It was this event, with both experts challenging the way history has traditionally presented Robespierre, which inspired my initial interest in learning more about the French Revolution and its Jacobin leader in particular. From that moment onwards it was a matter of reading and viewing all I could about him – from books and journal articles to online archives, films and forums.

What I soon realised was that there is no point in looking at historic figures simply as one-dimensional characters based on big events. In the ordinary everyday they were as complex and as human as you and I, and just as susceptible to influence – good or bad. The second thing I learned was to treat both primary and secondary sources with caution – just because a document is ancient and revered doesn’t mean it is without bias or sub-text, just as a book written by a famous historian isn’t definitive. 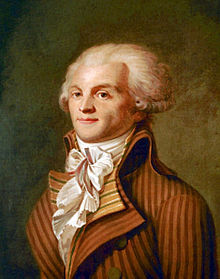 So, did I manage to tease out the truth behind the awful stories that surround Robespierre? On the basis of the evidence, I would say he was far from being a monster, and even less a tyrant.

For a start, the evidence shows he hated violence, opposed war and even tried to ban the death penalty. Even during the period of the Terror, he never had the authority to act alone.

Robespierre was a deep thinker and he cared about the things that a lesser man would disregard. As a young lawyer he represented the under-dog and often worked for nothing in return. As a politician he promoted freedom, equality and fairness. It’s true that, later on, he acted irrationally, but there’s no evidence of evil intent. Essentially, Robespierre was an idealist, an egalitarian and well-meaning: a young lawyer from rural France who simply wanted to make life better for people – including, unusually for the time, women. What’s not to like?

Christine Evans-Appleyard graduated with a BA in History and Sociology at Kingston University in July, 2016. 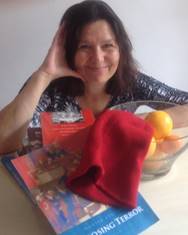 Christine with books, bonnet and oranges

Christine has just won a national prize for an essay entered in the French Revolution Essay Competition, held by the Society for the Study of French History, in August, 2016.