Wells in Woking: celebration of the local connections of famous sci-fi writer

Posted on July 20, 2016 by historyatkingston

Did you know that the small commuter town of Woking in Surrey played a key role in the defence of earth from alien invasion in the mid-1890s? The celebrated science-fiction writer and historian H.G. Wells recalled in his autobiography how he would cycle around the district of Woking marking down, as he put it, ‘suitable places and people for destruction by my Martians’.

Wells, of course, went on to write the seminal sci-fi novel The War of the Worlds (1898), which joined his best-selling earlier stories The Time Machine (1895), Island of Dr. Moreau (1896) and The Invisible Man (1897), and shaped the imaginations of many generations of readers to come (including me!).

As part of the 150th anniversary of the birth of H.G. Wells (1866-1946), Woking has been holding a special programme of events to mark the occasion. Many Woking residents are already aware of the Wells connection, as the local railway station, a local pub, and the town’s lovely public common were all featured in Wells’s account of the ruthless Martian invasion, together with a local golf course (which still exists today). The railway station was obliterated by the pesky Martians, while nearby houses were left a ‘heap of fiery ruins’. After destroying large parts of Surrey, the Martian ships moved towards London.

While he was writing his classic book, the recently-divorced Wells (he had first married his cousin, Isabel) lived for two years in a small semi-detached house in Maybury Road, in Woking, with his new wife Amy Catherine. The sharp-eyed walker can spot a Woking Borough Council commerative plaque on the side of his house there. Wells later moved to Worcester Park, before eventually settling in Sandgate, in Kent. Further classic pieces of fiction soon followed after the ground-breaking The War of the Worlds, including The First Men in the Moon (1901) and The History of Mr. Polly (1910). 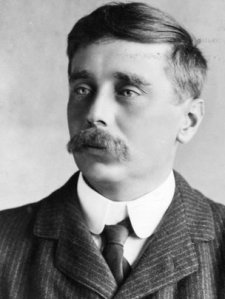 Wells (see picture taken in the 1890s) was full of fascinating contradictions. He was an active Fabian Socialist and liberal reformer who placed his faith in the better ‘planning’ of society but, more controversially, was also an elitist who dabbled with eugenics and other forms of racism. On the one hand, he complained about the threat of the so-called ‘yahoo’ (unfit people who were a ‘burden’ on society) and advocated the engineering of better types of physically fit human beings; on the other hand, he suffered from asthma himself and was also a diabetic (he co-founded the Diabetes UK organisation in 1934). He appeared to have a wide range of views on everything, but especially the impact of science on society. As such, he increasingly contributed to the social commentary and big debates of the day through regular pieces of journalism. Moreover, Wells slowly became an internationally known commentator on general political affairs and the fate of the world (warning, for example, about the threat to civilisation of the ‘yellow races’), and his opinions were sought after by leading politicians in other countries. He met, among others, President Theodore ‘Teddy’ Roosevelt in 1906, Bolshevik leader Vladimir Lenin in 1920, and President Franklin D. Roosevelt in 1935.

His views and predictions about the future nature of war were particularly influential (in hindsight, his fictional vision of ‘land-machines’ sounded remarkably like what became the military ‘tanks’ of the First World War), and his ideas were set out in books such as The War that will end war (1914), The Outline of History (1920), and The Shape of Things to Come (1933). A feature film based on the latter novel arguably frightened many cinema audiences and politicians in the 1930s, with its horrific images of mass casualties through air bombardment and gas attacks, and possibly fed into British anti-war and pro-appeasement sentiment in the mid-to-late 1930s.

My own favourite Wells novel remains The Time Machine, which I first discovered as a young boy and have read many times since. It helped feed my relentless appetite for visions of both the past and the future. And so, dear reader, I became a historian!

Steve Woodbridge is Lecturer in History at Kingston University

The H.G. Wells celebration events continue through July, August and September, 2016, with walks, talks and other other special events in the Woking area. From September 1st to October 1st, for example, there will be a special exhibition, Woking in Wells’ Time, held at the Surrey History Centre in Woking.

On September 17th, Professor Peter Beck, who is Professor Emeritus of International History at Kingston University (and also a resident of Woking) will give a talk, Wells and Woking: The Literary Heritage, at Surrey History Centre.

For more details on all the above, visit: http://www.celebratewoking.info