Posted on March 9, 2016 by historyatkingston

‘Step into the curious and chaotic world of history’s greatest witness‘.

Samuel Pepys witnessed one of the most turbulent periods in English history. Beginning with the execution of Charles I in 1649 and ending with the Glorious Revolution of 1688, a major exhibition at the National Maritime Museum in Greenwich uses Pepys’s writings to explore the dangerous and enthralling world of seventeenth-century London. 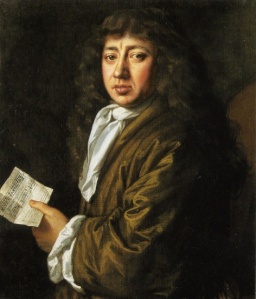 Bringing together over 200 pictures and objects, ‘Samuel Pepys: Plague, Fire and Revolution’ is the largest ever exhibition to focus on the famous diarist. Not only does the exhibition offer a study of the life and opinions of Pepys himself, but it also looks beyond the years covered by the diary (1660-69), drawing on, for example, portraits, drama, clothing, and pamphlets to explore the society and politics of the age.

Death and devastation feature strongly. The exhibition begins with a vivid account of Charles I’s execution, at which the 15-year old Pepys was a spectator. Despite his later loyalty to James II, the schoolboy Pepys was a fervent republican. Having begged off his morning’s lessons, Pepys watched the spectacle with satisfaction, declaring later to his friends that ‘The memory of the wicked shall rot’.

The theme continues with Pepys’s account of the Great Plague of 1665. The Black Death, which first appeared in England in the fourteenth century, was an agonising and horrifying disease. Characterised by pus-filled buboes in the groin, neck and armpits, the Plague attacked quickly and indiscriminately, infecting rich and poor alike. Striking first in the parish of St. Giles-in-the-Field, in the spring and summer of 1665, the Great Plague killed approximately 15% of London’s population.

Whilst the rich typically fled the capital, Pepys, either bravely or foolishly, stayed in London, watching as the Plague claimed more and more victims. On 31st August, 1665, alarmed and saddened by the growing death toll, Pepys finally made the decision to leave London:

‘Up, and after putting several things in order to removal to Woolwich, the plague having a great increase this week beyond all expectation, of almost 2000 – making the general Bill 7000, odd 100 and the plague above 6000… Thus this month ends, with great sadness upon the public through the greateness [sic] of the plague, everywhere through the Kingdom almost. Every day sadder and sadder news of its increase’.

The Plague, already losing its virulence, lost its hold after September, 1666, when the Great Fire destroyed many of the rats and fleas that had spread the Plague bacillus amongst London’s population.

By following the spread of the fire across London through the eyes of Pepys, the exhibition offers a fresh perspective of this well-known disaster. This means that the visitor, well aware of the devastation this fire will cause as it cuts through the crowded London streets, finds themselves worriedly reproaching Pepys, who, on first being informed of the fire in the early hours of the morning, judged it not to be a threat and went back to bed. Through the diary, we gain a sense of the fear and frustration that would later grip Pepys:

‘So I rode down to the waterside,… and there saw a lamentable fire… Everybody endeavouring to remove their goods, and flinging into the river or bringing them into lighters that lay off, poor people staying in their houses as long as till the very fire touched them, and then running into boats, or clambering from one pair of stairs by the waterside to one another. And among other things, the poor pigeons, I perceive, were loath to leave their houses, but hovered about the windows and balconies, till they some of them burned their wings and fell down’. 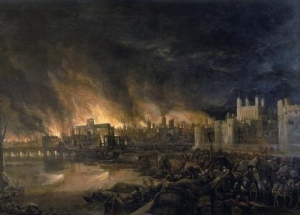 Moving away from scenes of devastation, like Pepys himself, the exhibition revels in the social and sexual possibilities generated within the rapidly expanding city. Pepys had access to the Restoration court (described by N.H. Keeble as a ‘frenetic sexual circus’) and the exhibition reflects this with sections on the late seventeenth-century theatre and portraits of Nell Gwynn and the notorious John Wilmot, 2nd Earl of Rochester. We also gain some insight into Pepys’s own exploits and adventures, recorded in some detail in his diary.

Through the exhibition’s focus on Pepys’s career as a naval official, however, we are reminded that there was more to life in Restoration London than the mere pursuit of pleasure. As the historian Claire Tomalin notes, Pepys’s diary ‘provides the first full and direct account ever of a man starting uncertainly on a professional career and finding, to his own surprise, that work is one of the major pleasures of life’. In fact, as a working man, Pepys was relatively conscientious and somewhat talented, and it is at this point that the exhibition widens out into a maritime world of strategy and conflict.

Pepys’s diaries themselves are, unfortunately, absent from the exhibition: held at Magdalene College, Cambridge, the terms under which they were bequeathed forbid them from leaving. Surprisingly, this does not leave a conspicuous gap, as – instead – the exhibition draws on virtual copies, which can be browsed through at will. In any case, Pepys’s shorthand can be inpenetrable to the uninitiated.

Overall, the exhibition celebrates not only Pepys himself, but the multifaceted world of late seventeenth-century London, successfully justifying Pepys’s reputation as one of history’s greatest witnesses.

Dr. Rachael Johnson is Lecturer in History at Kingston University.